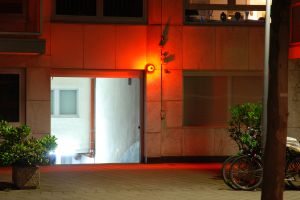 Private security agencies’ personnel, employed in surveillance of banks, office buildings, large firms, shopping malls and so on, is exposed to a high level of risk due to the extremely sensitive nature of the targets guarded, especially if they are on a night route and not inside a building behind bulletproof glass.

To minimize the level of risk connected to this job, GuardTrax has launched GT2 Security Force Locator, a system designed to keep surveillance personnel’s position under control in real time.

GT2 is made up of a small transmitter, more or less as small as a normal mobile phone, housed in a sturdy weather-proof plastic shell, which includes a series of functions and features useful both for patrolling routes and for communication with control center.

For example, via the “panic button” the surveillance operators can send an instant message to the control center, while entering preset codes at fixed intervals, they will be able to inform the center on their activities and operating conditions. Also, the motion detection sensor can determine a lack of motion for a certain time interval, and send a top priority alert to the supervisor who will be able to contact the staff member via mobile phone to make sure that all is fine.

GT2 also works like a normal mobile phone, calling up to 4 preset emergency numbers. Furthermore, like a GPS locator, it can send an automated alert if it leaves a certain area or if it enters a designated “danger zone”, thus allowing to determine if the guardian is being held hostage by thieves or terrorists.

Thanks to GT2, working conditions of those who work in the security and surveillance field will certainly be improved, with understandable benefits for the operator, for his employers, and ultimately, for the client whose security is being guarded.