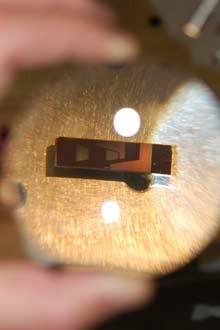 Nowadays, most of the telecommunications are carried out at a speed of 10 Gbit per second, but researchers are constantly at work to push this limit forward. At Cornell University, they are working on the time telescope project, that is, a system capable of multiplying the modern optical fibers’ speed, making connections up to 27 times faster by compressing more information into a single burst of light.

Improving the 10 Gbit threshold is one of the great challenges in the optical fibers telecommunication field, because due to technological limitations, at the current stage this limit can only be improved by using a huge amount of energy, at an equally huge cost.

The so called “time telescope” that Cornell is working on, is made up of two silicon chips, called “time lenses” which work like the lenses of a telescope, sending ultra-compact light bursts which can contain much more information if compared to the continuous beam of light used in the current optical fiber cables.

This result is achieved through a complicated process that works on the frequencies of each burst of light. Through the time lenses, the frequency of the front side of a burst is reduced, while the rear frequency is augmented, effectively resulting in a compression of the signal.

As explained, the process is not easy to describe, but what matters is the result, that is, a significant increase in speed of optical transmissions, with no increase in terms of energy consumption.

Future implications might be ground-breaking, not only as far as communication speed is concerned, but also in terms of energy saving for our Internet and telephone lines.