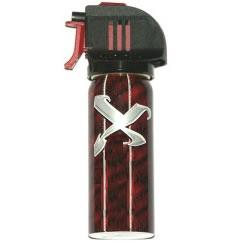 In the Middle Age, punishments for thieves were certainly effective, even though the modern society rules would not certainly define them as humane: thieves had their hands cut, and if they were for example caught red-handed when trying to steal cattle, they were branded with fire, so that they would be permanently exposed as thieves, and would then think twice before committing a crime.

Nowadays, punishments are certainly less violent, but there are ways to protect yourselves from thieves and aggressors which, if on the one hand they may remind us of medieval punishments, on the other hand make the police’s job easier when it comes to catching the culprit.

For example there is X-Spray, a self-defense spray which works in a slightly different way from other pepper spray products, which are commonly used, for example, by women living in dangerous areas.

In fact, this kind of product, besides letting out a substance which hurts the eyes, also sprays foam, which will create a thick layer on the offender’s face, leaving him confused and giving you time to escape. Once the guy removes the foam from his face, here comes a big surprise!

The X-Spray foam, in fact, contains an indelible colored dye, which will remain visible for at least 3 days, helping the police in any investigation on the case, and making the thief’s life difficult, as he will have trouble hiding or explaining the reason of that strange stain on his face.

In short, no need to use medieval methods, there is no need to brand the thief, but you can certainly make him a bit less dangerous, and next time, he will think twice before attacking a woman!