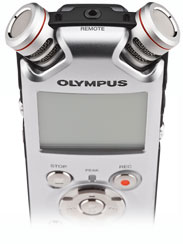 At the Berlin IFA, Olympus has introduced its new model of miniature digital recorder, the LS-11 model, which will be available for sale within a few weeks at a price around 400 dollars.
It is a microrecorder which, despite its small size, encompasses a series of features which make it a real professional recording system.

It can record in three different audio formats, through its two high sensitivity noise-reduction microphones, storing its recordings on an internal in-built 8 Gb memory, which can be extended up to 40 Gb by adding a 32 Gb SD memory card. The recorded files can be edited directly from the recorder, by cutting them, erasing them or moving them between the internal memory and the SD card.

A new feature for this series of Olympus miniature recorders is the VCVA variable voice activation sensor, which allows for an automatic recording start when it detects a certain volume level around it.

When recording is activated manually, LS-11 can be the perfect travel and work companion for journalists or writers, who can use it to take quick notes on the go, recording small audio excerpts or interviews. By setting up the suitable level of sensitivity, the automated recording start sensor makes it perfect for covert recordings and eavesdropping of meetings, confidential conversations or for evidence gathering by private detectives or law enforcement agents.

Its weight is a mere 142 grams, and it is operated by two AA batteries, providing up to 23 hours of recording time. It is also equipped with two small 16mm loudspeakers for immediate listening, and it also features a pre-installed version of Cubase, a popular software which is the standard among musicians for editing operations on audio tracks.