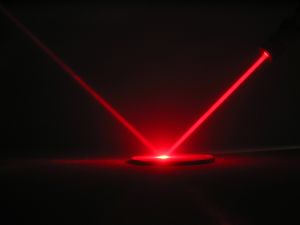 It looks like a scene from a spy movie, but it’s absolutely for real: thanks to the possibilities offered by a laser beam, police and law enforcement can listen to the conversations taking place inside a room, without having to be nearby, and with no need to plant covert listening devices inside the room, thus operating in conditions of absolute safety, from a distance of up to a mile.

How can all this happen? Thanks to a laser microphone. Laser directional microphones are based, as the name goes, on a laser beam, shot by a transmitter, and aimed at the glass of a window, or any object placed near the persons whose conversations you wish to eavesdrop.

The glass or the object will vibrate in an imperceptible way, in response to the pressure exerted by the sound waves created by voices and noises inside the room, and the laser beam reflected by the glass is modulated according to those vibrations.
The reflected beam is picked up by a receiver placed at the right angle, which detects these modulations.

The small difference in distance covered by the laser beam in response to these vibrations is read by an interferometer placed into the receiver, which converts them into digital signals, and the signals are interpreted as sounds.

Thanks to all this, law enforcement operators will be able to pick up the conversations of dangerous criminals or mobsters gathered inside a room, while sitting at a convenient security distance which protects them from any possible threat or danger.