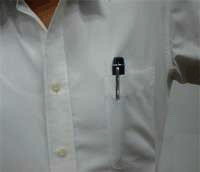 Yes I know, some of you will probably be thinking that sticking a video recorder in the front pocket of your jacket is not exactly the smartest of ideas. Relax, we are not talking about the normal video recorder that you have at home connected to your TV set, but rather about a powerful, and considerably easier to handle, video recorder pen.

Specifically, we are actually talking about a model called DVR-PEN, which aside from being a perfectly working… uhm, pen, also houses a miniaturized digital video camera, and an equally miniaturized viewer. Inside the pen, and obviously in a very tiny size, one can find an embedded USB memory module, capable of storing up to 4GB.

This results in a maximum video recording capacity of up to 6 hours (in AVI format with 640×480 resolution), and up to three hours with a single battery recharge in continuous recording mode. Thanks to its miniature size, DVR-PEN would raise no unnecessary attention, and the possibility to start recording with just one touch of a button makes it suitable for hidden camera applications.

For example, both for leisure and professionally, you can use it for candid camera recordings, or more simply just to tape a conference or a concert, while law enforcement and private detectives can find a valuable support to gather evidence to be used, at a later stage, before a court of law.

Furthermore, the option to start recording automatically thanks to the voice activation sensor provides further security, privacy and ease of use, reducing the risk of being exposed.