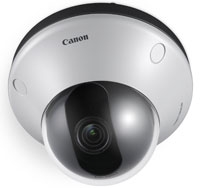 As we know too well, surveillance is now a vital aspect of our modern society: companies, institutions, banks and private individuals find themselves in need to protect their offices or their homes against any kind of non authorized access, and the most common solution is given by video surveillance cameras.

Too often though, these cameras are subject to attacks either from thieves or vandals, aimed at minimizing or disrupting the efficiency of your protection system. To prevent this kind of events from happening, Canon has created a dome-shaped mini camera, VB-C500VD, which can for example be used within a closed circuit network.

Thanks to its wide-angle lens it offers a greatly enhanced point of view, also in poor lighting conditions due to its high sensitivity, and thanks to its automated activation sensor, it can start operating as soon as it detects a motion within its range. Furthermore, its processor can send you an email or an SMS to inform you in real time about a potential threat. If installed within a network, it can use PoE (Power over Ethernet) to receive power supply and transmit its data over just one cable.

What makes it perfect for being used on the outside (for example for surveillance of banks or ATMs) is its sturdy shell made up of high-resistance materials such as polycarbonate and aluminum, which makes it resistant to impacts and damage attempts. It is also mounted with special tamper proof screws, making it impossible to remove for non-authorized personnel.
In a few words, VB-C500VD is an absolutely vital tool to protect your assets and guarantee a continuous surveillance around the clock.