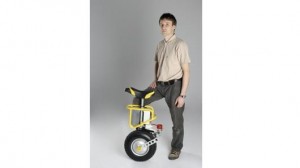 Maybe it’s not the fastest of means of transportation, with its whopping 15 kilometers per hour maximum speed, but if the way to your office does not include highways or fast lanes, and parking is also a problem, maybe eniCycle could really be the solution of your choice…

This electric unicycle is somehow inspired by the world-famous Segway, from which it retains some characteristics in terms of balancing, although EniCycle is equipped with just one wheel instead of three, and is operated while seated instead of standing. Power supply is provided by a rechargeable battery with a life of approximately 3 hours. Recharging time is around 5 hours, and furthermore, it is also possible to recharge the battery during motion, if the road goes downhill.

EniCycle is made up of a seat mounted on a single wheel, with the battery pack placed between seat and wheel. Driving is very easy, and according to the designers, mastering it takes only 30 minutes.

It does not have any pedals, only foot pegs, which are also used to steer it: just push on the right peg to turn right, and on the left one to turn left. To speed up, just lean forward, and in the same fashion, leaning backwards will result in the EniCycle slowing down.

The heart of EniCycle is an array of gyroscopes and micro-electro-mechanic accelerometers, which provide a perfect balancing and reading of the driver’s movements, thus responding by gaining or losing speed, or by turning. These components are similar to the ones used in videogame controllers and joysticks.