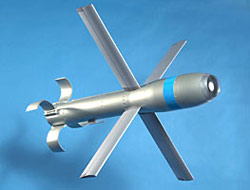 The Hunter drones, or UAS (Unmanned Aircraft Systems), produced by Los Angeles-based Northrop Grumman, will soon be equipped with Viper Strike, a system capable of assisting the missiles guidance systems thanks to laser and GPS positioning, to strike both fixed and moving targets.

Hunter MQ-5B is currently used for reconnaissance, aerial surveillance and target acquisition. Thanks to the addition of this pointing system, and the Hunter’s flexibility and reliability, proven by over 80000 hours of operation, it will be possible to use the drone also for attack missions.

The first Hunter model, called RQ-5A, was the first UAS to be used by the US Army. Its second generation MQ-5B, can be distinguished for its heavy fuel propulsion, for the tanks placed inside its central wing, and also for its technological features, like its optics and the system for communication with its ground station. With the integration of Viper Strike, the US Army will have one more tool to guarantee the safety of their men, especially on difficult terrains.

Another very useful feature is the relay control, which allows the Hunter to be controlled not only by the ground station, but also by another ground-controlled UAS. By doing this, in harsh terrains where mountains hamper communications, the Hunter’s operating range can be expanded.

Its sturdiness and reliability make it a perfect companion for armed forces in mountainous terrains, and the Viper Strike addition will only improve the troops’ confidence in this drone, confidentially called “workhorse“.