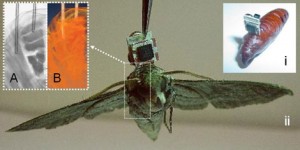 Looks like a gadget out of a science fiction movie like Terminator, but it might be reality pretty soon. The US Ministry of Defense is financing a research program aimed at creating cyborg moths, that is, insects on which, when they are still at larval stage, miniature electrodes and control chips are mounted. The research project has been presented at the latest ISSCC (International Solid State Circuits Conference).

Thanks to these electrodes and to a miniaturized ultra low-power radio transmitter, it will be possible to control the moths’ flight; they will be turned into micro robots and, remotely controlled, will be capable of transmitting images or sounds, which can be used for a wide range of applications, from surveillance operations to natural disaster prevention.

The necessary energy to power these miniaturized electronic components will be generated by the moths themselves, thanks to their motion and flight. The components’ weight will not have to exceed 2.5 grams, as this is the average weight of a hawk moth, and above this weight the moth would be unable to fly. The power consumption will have to be equally small, in order to be able to work thanks to the moth’s flight.

In short, the moth is controlled through three different chips: the first one is a microscopic radio transceiver, connected to a tungsten neurostimulator. When the radio receives a command, the stimulator sends a pulse to the moth’s nervous tissues, thus inducing movement in a particular direction.

The second chip is a tiny processor which transforms the gathered data into radio signals to be sent to the receiving station; the third chip is the engine, that is, the one that turns the moth’s motion in energy used to power the whole system installed inside it, turning the flight vibrations into mechanic and electric power.