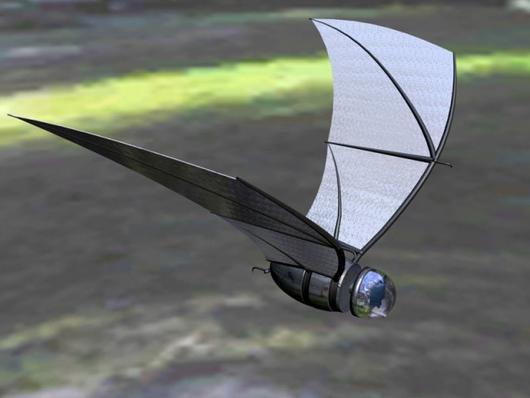 Mini spy planes or MAV’s (Micro Air vehicles) are starting to give a different idea of what video surveillance is, both in the military and civilian field. In a costant race towards improvement, new prototypes are being developed which sport the most extreme shapes, often inspired by nature. Obviously the most common source of inspiration comes from birds or winged mammals (there is even a pterodactyl-shaped MAV!).

And by taking inspiration from the shape of a bat, University of Michigan is developing a mini spy plane, only 15cm long and weighing approximately 100 grams, which can be powered by means of solar and wind energy.

The COM-BAT project hes received government funding for approximately 10 milion dollars, with an option for a further 12.5 million funding, to develop a mini plane which can be suitable for urban combat situations, capable of picking up images and sounds, and transmit them in real time via airwaves towards an operations base, which will use the data to coordinate the operations on the ground.

This is possible thanks to a miniaturized technology including stereo video cameras, miniaturized microphones and sensors capable of detecting nuclear radiations, poisonous gas or radar source, all this powered by natural energy, with a backup Li-Ion battery.