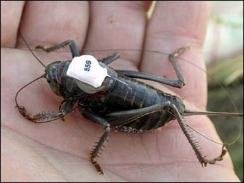 In the US State of North Carolina, mass migrations of insects are a real calamity for the local agriculture and farming industry. The so called Mormon Crickets move in huge packs of hundreds of thousands or possibly millions, devastating fields and crops during their migration journeys. Scientists are trying to track down the path of their migrations, in order to be able to protect the fields by targeted application of pesticides, instead of the current blanket application policy.

At the University of Chapel Hill, NC, thanks to funding received from the Department of Agriculture, a research is being carried out through application of miniature radio transmitters on the back of migrating crickets. The crickets are separated from the pack, and with special glue, a micro transmitter weighing less than a gram is placed on their backs.

Thanks to the application of these transmitters, scientists have been able to ascertain, as a first result, that when crickets are separated from the pack, their mortality rate increases dramatically. Therefore, traveling in packs is a survival mechanism.

If this research program allows to identify migration routes, farmers will be able to take the suitable measures, reducing costs for indiscriminate use of pesticides, which kill all insects in the area, causing damages to the food chain and polluting drinking water.

Solution of a local problem in an agriculture-based region of the US might have positive effects also on a world scale, functioning as a reference point for other areas, particularly in underdeveloped countries, and maybe even help reduce famine in these areas.